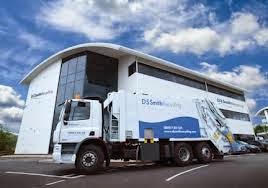 DS Smith was foolishly offloaded from my portfolio last June and I have been awaiting an opportunity to repurchase - here’s a link to a post from April 2013.

The company has today reported a strong set of results for the year to April 2014 (link via Investegate) with adjusted profits up 23% at £307m and revenues up 10% at just over £4bn.

The driving force behind the company’s improved performance has been the takeover of SCA in 2012 and the growth in revenue over the past year includes the effect of a full year of SCA Packaging (compared to ten months in 2012/13) and was underpinned by corrugated box volume growth across Europe of 2.2 per cent. Plastics delivered revenue growth of 5%.

Approximately two thirds of the Group's earnings are in euros. The results for the year 2014/15 will likely be influenced by foreign exchange translation, where the euro is currently weaker than the average rate over 2013/14 of 1.19. A change of 1c impacts EBITA by approximately £1.6 million and profit before tax by approximately £1.2 million..

Chief Executive Miles Roberts said: "This is a strong set of results achieved despite economic conditions across Europe remaining challenging. We have achieved our synergy targets for the year and delivered good growth in profits, returns and dividends.

Our strengthened customer proposition and an ability to deliver across the whole customer supply cycle has led to increased market share across our regions. The current year has started well and is in line with our expectations."

DS Smith said while it expects the difficult consumer economic environment to remain, it believes the sustainability of its business model will create further growth opportunities.

The group has recommended an increased dividend payment of 10p compared to the previous years  8p. The dividend is covered 2.1x by earnings

Despite what appears to be v. good numbers today, the share price has retreated over 5% to 287p (at the time of posting). With the combination of a lower share price and a 25% hike in the dividend, I have taken the opportunity to repurchase for my income shares portfolio on a yield of 3.5%.
Posted by diy investor (UK) at 14:37