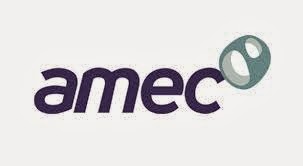 Originally a construction company focused on the UK, AMEC has during the last decade transformed itself into one of the world's leading engineering, project management and consultancy groups. Clients include BP and National Grid , and projects include building oil pipelines, constructing mines and designing power stations.

Its goal is to deliver profitable, safe and sustainable projects and services for their customers in the oil and gas, mining, clean energy, environment and infrastructure markets, including sectors that play a vital role in the global and national economies and in people’s everyday lives.

They design, deliver and maintain strategic assets, offering services which extend from environmental and front-end engineering design before the start of a project to decommissioning at the end of an asset’s life. Customers, in both the private and public sector, are among the world’s biggest and best in their fields - BP, Shell, EDF, National Grid and U.S. Navy to name just a few.

Amec are truly international, with major operations centers based in the UK and Americas and offices and projects in around 40 countries worldwide.

Last year they served up a tasty 20% dividend hike to 36.5p per share following the company's strong cash generation and future growth potential.

For the six months to 30th June, the company were trading inline with expectations - earnings per share are up 16% at 40.4p and the interim dividend has been lifted by 15% to 13.5p. They expect earning to exceed 100p over the coming year.

In September, Amec walked away from a proposed takeover of FTSE 250 oil services and engineering company Kentz and, in the absence of another acquisition, the board will consider the option of an additional cash return to shareholders before the end of the year.

The share price received a boost over the past week on news that the Hinkley Point C nuclear power station would go ahead after a deal with French concern EDF. Deutsche Bank suggested that Amec is line for at least £500m of engineering work and could compete for further business to take that total to more than £1bn.

The broker does not expect any material impact in the current year, but it is a boost for sentiment, which, as nuclear accounts for about 15% of Amecs group earnings, is an important part of the investment case.

More on Amec following the full year results next February
Posted by diy investor (UK) at 09:25