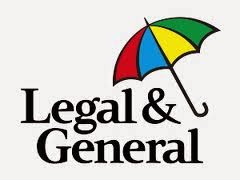 There will not be many people in the UK who have not heard of the large insurer. It has been around since 1836 started by six lawyers operating from temporary premises in Chancery Lane.

L&G is now a large FTSE 100 company with a market cap of £12bn employing over 8,000 people serving 10 million customers. It is responsible for investing over £500bn worldwide with operations in USA, France, The Netherlands, Egypt, India and the Gulf. However the UK still accounts for the majority of its business.

Earlier this month, the Company announced its preliminary results for 2013 - here’s the highlights:

Nigel Wilson, Group Chief Executive, said:
"Disciplined investment in growth, effective management and rigorous cost control has enabled us to more than triple net cash since the financial crisis: it has grown from £320m in 2008 to £1,002m in 2013. We have grown dividends again by over 20% and due to the strength of the business intend to move dividend cover from 1.8 towards 1.5 times over the next two years.

Legal & General moved up another gear in 2013, delivering record financial results and accelerating growth across all areas. Net inflows were £17bn including £9bn in LGIM and £8bn into Cofunds. LGIM now has £450bn of AUM, and Cofunds, with £64bn of assets is the UK’s largest Savings platform. Annuity premiums grew by 78% to over £4bn, protection gross premiums were over £1.3bn, and we intermediated £28bn of mortgages. We successfully completed four acquisitions in 2013 and have announced a further acquisition in 2014.

We have delivered significant outperformance during lean economic times and are building momentum as the economy recovers. We now have over 10 million customers who we provide with good quality, good value
products and excellent service, including through the recent floods".

Since this announcement we have had the budget and the proposed changes to pensions which means fewer people will be forced to choose an annuity. Secondly, the Financial Conduct Authority have today announced they will be conducting an investigation into 30 million poorly managed pension and investment products sold between the 1970s and 2000 to see whether customers have been treated fairly.

This double whammy has knocked the share prices of all the main insurers and pension providers in recent weeks. At the time of the results the L&G share price was 240p but has retreated to just above 200p - a fall of over 15%.

For annuity providers such as L&G, the pension reforms threatens a key business line - commenting on the post-budget scenario this week, CEO Nigel Wilson said L&G's business mix would change following the reforms, with more emphasis on its fund management and pension savings businesses. He also said L&G's "bulk" annuity business, aimed at company pensions rather than individuals and which is unaffected by the reforms, would continue to grow, offsetting falling sales of the products to individuals. L&G predicts that much of the money that individual savers would have automatically put into annuities under the old system will now be invested in alternative products, with some £5bn a year taken in cash.

In a separate announcement this week, the company announced  it had won a £3bn bulk annuity contract with the pension fund of chemicals maker ICI (now part of Dutch group Akzo Nobel NV), adding to its £34.4bn stock of annuity assets.

Obviously, it is likely there will be further price volatility until there is more clarity on the impact of the above issues however I have decided to purchase my usual ‘half’ earlier today at 206p and will possible top up later in the year should there be further share price weakness. The shares are currently trading on a P/E of 13.5 and yield of 4.5%.