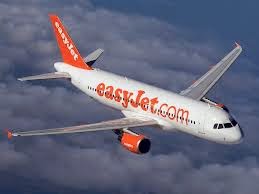 easyJet have today announced interim results (link via Investegate) They show a loss before tax of £53m for the six months to March 31 - better than the £55m-£65m range forecast by the airline earlier this year.

Airlines traditionally make losses over the winter months before moving into the black during the lucrative summer season. Total revenues rose 6.3pc to £1.7bn. As previously signalled, last year Easter fell on 31 March resulting in £25 million of additional revenue in the first half of 2013. This year Easter fell in the second half  - mid April.

Commenting on these results, CEO Carolyn McCall said :
"easyJet has delivered a solid first half performance despite the less benign capacity environment.  The results reflect our on-going progress against our strategic priorities, and demonstrate the structural advantage easyJet has against both legacy and low cost competition in the European short haul market.
By continuing to deliver our strategy of offering customers lower fares to great destinations with friendly service while focusing upon costs, we can continue to deliver sustainable growth and returns for our shareholders.  There continue to be a number of attractive opportunities for easyJet to grow profitably in Europe and we look forward to making further progress in the second half of the year."

easyJet returned £308m or to shareholders through the payment of an ordinary dividend of 33.5p per share (at 3x earnings cover) and a special dividend of a further 44.1p - both paid March 2014. I was half hoping there may have been some mention of the introduction of an interim dividend but nothing announced so looks like just the final dividend to be announced at the time of the final results. I have a figure of 36p pencilled in which would put the forward yield at around 2.2% at current prices.

In an interview with the BBC R4 this morning, Carolyn McCall hailed the introduction of allocated seating on flights as the low cost airline's most popular initiative ever with passengers. In the full year to 31 March 2014 the Airline carried 12 million business passengers for the first time.

The share price has seen a strong run over the past few months. As far as I can see, these results were pretty much in line with expectations. At the time of posting the share price however was down over 3% at £16.60. Happy with my decision to purchase and happy to continue holding.
Posted by diy investor (UK) at 14:46