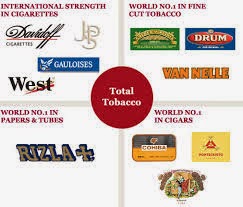 Imperial have today released full year results for the 12 months to 30th September 2014 (link via Investegate).

Group net tobacco revenues totalled £6.5bn, up 2% underlying but down 6% in actual terms. Imperial said underlying volumes of growth brands rose 7%, driven by sales growth and brand migrations. Its growth and specialist brands also made up 54% of underlying tobacco net revenue, up 3%.

It said it performed strongly in growth markets outside established areas such as Europe and the US. It also said it had reduced stock held by distributors, particularly Russia and Iraq and had saved more than £60m during the year, putting it on track to save £300m a year by 2018.

Overall adjusted net debt fell £1bn or 11% to £8.1bn partly due to proceeds from a partial listing of its European logistics operation which raised £395m.

In July, IMT agreed to purchase a number of brands from Reynolds USA for £4.2bn. The deal is expected to complete next Spring and will be financed by additional borrowing.

Alison Cooper, Chief Executive, said:
"This has been a year of significant delivery by Imperial. We've strengthened our brands and market footprint, improved cash conversion to 91%, reduced debt by £1 billion and delivered another 10 per cent dividend increase to shareholders.

We've achieved what we set out to achieve, creating a stronger business in the process. Trading conditions remain tough in many territories but the actions we've taken to enhance the quality and sustainability of the business have put us in a stronger position."

The final dividend will be paid in February and will then be moving to quarterly dividends starting next June.

Given the decent share price appreciation over the past year combined with top ups to several of my investment trusts which have significant holdings of IMT, I am reaching a point where I will become too overweight with this share. I will therefore monitor and may sell if the price continues to rise over coming months.