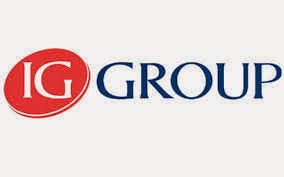 Founded in 1974 as the worlds first spread betting firm, IG has grown rapidly and is now a global leader in online trading, providing fast and flexible access to over 10,000 financial markets – including shares, indices, forex, commodities and binaries. It is a member of the FTSE 250 with a market capitalisation of around £2.8bn.

The company had a spell in private ownership but was readmitted to the market in 2005 at the price of 120p. Dividends growth has been very impressive over the past decade moving from 5.50p to 28.15p - a CAGR of over 17% p.a.

I have said on many occasions that one of the aspects I look for when considering an addition to my portfolio is some degree of competitive advantage or ‘moat’. Having previously held IG Group in my ISA income portfolio, I am aware of its edge as market leading brand with a global reach combined with constant commitment to innovation via new technology.

IGG was repurchased in my ISA last August following decent full year results, a 21% increase in the dividend and an increase in the payout ratio from 60% to 70%. Since then, the share price accelerated over 20% to an all time high of £7.60 in recent weeks.

The level of the final dividend is uncertain due to the surprise actions of the Swiss National Bank last week which caused a wave of client currency losses that led to a £30m hit on the company. They say "If full year diluted earnings per share were to be lower than last year purely because of this highly unusual event, the Board’s current intention would be to maintain the full year ordinary dividend at last year's level".

The share price was impacted around 5% last week following the Swiss Bank announcement however, the results appear to have been well received and at the time of posting, the sp is up around 2.5% @ 734p. If the final divi of 22.4p is maintained, this would give a figure of 30.85p for the full year which would put the shares on a fwd yield of 4.2%.

The balance sheet remains strong with cash and equivalents increasing from £101m to £150m over the 6m period.

In September, IG launched its UK stockbroking operation. After three and a half months, they had around 1,700 clients who had opened and funded an account, with over 60% of the applications having come from new clients. Over the coming year they plan to roll-out this service in other countries.

With the exception of the Swiss Bank losses, all appears positive and I am happy to hold for the foreseeable.
Posted by diy investor (UK) at 11:21