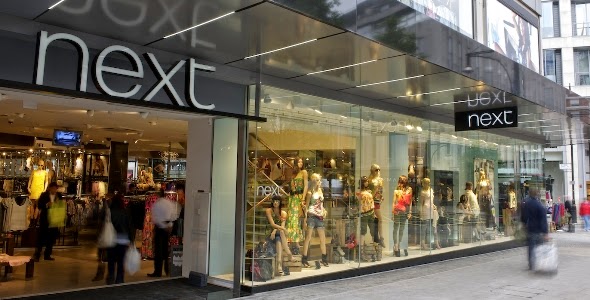 This FTSE 100 retailer was added to my ISA portfolio in October 2013 and so far it has been one of my more profitable acquisitions.

Today NEXT trades from 540 stores in the UK and Eire and almost 200 stores in more than 35 countries overseas. The only significant new territory launched in the past year was China.  Sales started slowly but are now exceeding expectations and the Company say that China will shortly become a top ten trading territory.

Online shopping was introduced in 1999 and the entire book became available to shop from on the internet, page by page – another first in home shopping in the UK. NEXT Directory now also serves customers in around 60 countries outside the UK. They expect international online sales to grow by 25% in the year ahead, to around £205m.

They have today reported results for the full year to 31st January 2015. Sales for NEXT Directory increased by 12% and NEXT Retail by 5%.  Total Group sales rose 7% and reached £4 billion for the first time. After the upbeat trading statement in December, it is little surprise that the figures are at the top end of forecasts with pre-tax profits rising 12.5% to £782m (2014 £695m).

As a result of share buy backs, earnings have risen 14.7% to 419.8p (2014 366p) per share supporting a full year dividend of 150p (2013 129p). Dividend cover is maintained at a healthy 2.8x earnings. The Company have also returned an additional 150p to shareholders by way of special dividends. This will be the 6th consecutive year that earnings and dividends have increased by more than 15% - quite an achievement and of course good news for income seekers.

The share price has advanced some 14% over the year and the board have decided continue to return excess cash to shareholders by way of special dividends - 50p was paid last month and a further 60p to come in May in addition to the 100p final dividend.

Furthermore, they have reviewed their financial objectives and now include the value of returning cash to shareholders. The restated aim includes the objective as the delivery of long term, sustainable growth in Total Shareholder Returns (TSR). TSR is defined as growth in earnings per share added to the total dividend yield. TSR over the past year was 19.3%.

The outlook for the coming year is slightly less positive than the previous year with forecast profits of between £785m - £835m and TSR of between 6% - 12% . The management are masters at managing expectation!

There is little doubt the year to January 2015 was another good year for NEXT. However, the forecasts for the coming year seem to be a little lower than analysts were anticipating and in early trading the share price was down over 4% at £73.00.

This is a very well run organisation under the stewardship of CEO, Lord Wolfson. I am happy to continue holding.
Posted by diy investor (UK) at 09:19