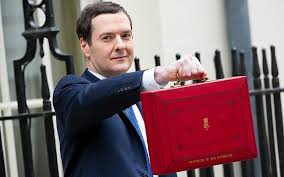 This is the first Conservative budget for 20 years after they surprised a lot of commentators by winning a majority at the last general election in May.

The main priority for the Chancellor is to get to grips with annual deficit which is adding to the national debt year on year. Some progress was made to reduce the annual spend over the previous 5 years of the coalition but the debt has risen to over £1.5 trillion, so clearly still a lot to be done, which will be unpopular with some sectors of the population.

The problems of government overspending are long standing and the strategy is to turn things around so that spending is reduced and we get back to living within our means. In particular, the per capita welfare state spending has doubled over the past 50 yrs as a percentage of GDP. Figures from the ONS reveal  that in 1961, people received benefits worth £1,100, equivalent to 7.6% of an average household’s income. By 2013/14 that amount had risen to over £6,000, equivalent to 17% of household income.

Some of the largest increases in the past decade have been in tax credits and housing benefit which is why these have become a natural target for the Chancellor to find savings.

The main changes announced were therefore that tax credits and Universal Credit would in future be restricted to two children, after April 2017. The income threshold for tax credits will be reduced from £6,420 to £3,850.

Alongside further cuts to corporation tax rates for all businesses, the government will reform and simplify the system of dividend taxation, while maintaining the extensive tax reliefs for investments held in ISAs and pensions. From April 2016 the government will remove the Dividend Tax Credit and replace it with a new tax-free Dividend Allowance of £5,000 a year for all taxpayers.

This will ensure that ordinary investors with smaller portfolios and modest dividend income will see no change in their tax liability – and some will pay less tax.

Combined with the increases the government has made to the personal allowance and the introduction of the Personal Savings Allowance, from April 2016 individuals will be able to receive up to £17,000 of income per annum tax-free, and separately invest up to £15,240 per annum through an ISA tax-free.

Following the big changes announced last year regarding pension freedom, there was little mention of any significant changes in this year’s budget. The only measure mentioned was that annual tax relief on pension contributions to be limited to £10,000 a year.

The Chancellor did announce that a consultation green paper would be introduced about future reforms and in particular, how to best encourage younger people to save for the future.

At first glance, it looks like the budget changes will be relatively neutral for me - like everyone, I will benefit from the increase in personal allowances from £10,600 to £11,000 next April.

Feel free to leave a comment if the budget has affected your finances or future planning.
Posted by diy investor (UK) at 15:04