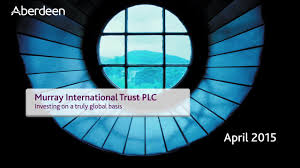 I hold MYI in both my sipp drawdown and also ISA. The trust aims to provide both capital and income growth from a portfolio that is predominantly focussed on global equities.

Prior to 2013, it had outperformed its benchmark in each of the previous 11 consecutive years. According to figures from the Association of Investment Companies, £1,000 invested over the past 10 years would have produced a total return of £2,500. With one or two exceptions, the dividend has grown or been held in each of the past 40 years. Dividend growth over the past 5 years is 7.8% p.a.

Murray International (MYI) has today reported results for the half year to 30th June 2015 (link via Investegate).

If the trend continues, it is looking like the trust will not manage to outperform its benchmark for a third consecutive year. The share price total return for the 6m was down -4.1% compared to +2.0% for the benchmark - comprising 40% of the FTSE World UK Index and 60% of the FTSE World ex-UK Index.

The reasons for the underperformance are an overweight positions in Asia and Latin America. In addition there has been a reduction in the premium to NAV - which is not surprising given the underperformance, currency exchange issues and an increase in weighting to fixed income securities.

Since the end of June, the share price has seen a further tumble given its exposure to the Asia economies - the chart for the year to-date looks a little in need of some tlc!

Whilst NAV per share has fallen over the past half year, the management charges to Aberdeen have remained almost unchanged at £3.58m (2014 £3.61m). Total charges represent 0.66% of net assets including transaction costs.

Given the outstanding track record to 2013, a year or two underperformance is to be expected. However, when it starts to become 3 years, possibly 4... who knows when the decline will be turned around. I took the opportunity to reduce my ISA holding earlier this year. I will probably hold the remainder for the time being but certainly with much less confidence then previously.

I would be interested to hear what others think about the situation with MYI - leave a comment below if you have any thoughts.