Last year, the company reported a record pre-tax loss of £6.4bn for the year, marking the biggest loss reported to-date by a British retailer. 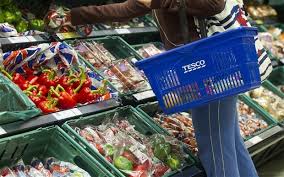 Tesco has today issued its results for the full year to end February 2016 (link via Investegate). The group reported net profits of just £162m from sales of £48bn - this works out at less than 0.5p for every £1.00 of goods sold.

CEO, Dave Lewis has now been in his post for 18 months and new UK chief exec Matt Davies, former CEO of Halfords, since last June. The effects of changes already implemented are starting to come through. Commenting on the results, the CEO said:

"We have made significant progress against the priorities we set out in October 2014.  We have regained competitiveness in the UK with significantly better service, a simpler range, record levels of availability and lower and more stable prices.  Our balance sheet is stronger and we are making good progress in rebuilding trust in Tesco and our investment case.
Our process of transformation has generated broad-based positive momentum in the UK and internationally. We set out to start rebuilding profitability whilst reinvesting in the customer offer, and we have done this.  More customers are buying more things more often at Tesco".


One of the main focus of the turnaround is to strengthen the balance sheet.

Earlier this week they announced their overseas division had sold 8.6% of its Lazada stake to Chinese internet giant Alibaba for $129m (£90.6m). Tesco will retain an 8.3% holding in the South East Asia-focused business

According to media reports, Tesco is planning to sell off some of its non-core businesses, including Dobbies Garden Centres chain, coffee shop chain Harris & Hoole and restaurant chain Giraffe, so that it can focus on the main supermarket business.

Capital expenditure has be reduced to just £1bn over the past year (2014/15  £1.8bn) whilst net debt reduced some 40% from £8.5bn to £5.1bn. Capital expenditure in 2016/17 will be around £1.25bn including an increased spend to refresh UK stores and an accelerated store opening programme in Thailand.

There has been no dividend paid over the past 12m and no mention in the report to indicate when it may resume.


Whilst the FTSE 100 may be getting back to above the level at the start of 2016, so far this year, Tesco is one of the highest risers in my portfolio gaining around 28% since the last trading update in January.

There now appears to be some light at the end of the tunnel. The results today however have not been particularly well received by Mr Market and at the close the share price is down ~5% at 187p.

I am hoping, in the absence of dividends, the share price progress can be maintained and move beyond the 200p barrier before long.
Posted by diy investor (UK) at 19:05