A Momentous Decision is Made!

Well, having cast my vote to leave the EU yesterday, although I thought the outcome would be close I genuinely believed the majority would choose to remain. As the night of the results unfolded I was really stunned to see the level of support for Leave up and down the country - well except Scotland which was no surprise. 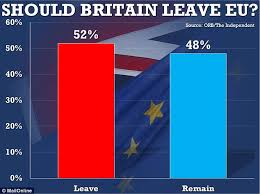 The final figures were 52% Leave and 48% Remain which is clearly decisive. The turnout was over 72%.

Of course, this is not the outcome predicted by the polls - we really should not be surprised - and the markets have seen a sharp decline with the FTSE 100 down around 5% at lunch and the pound losing around 8% against the dollar.

The result has seen our prime minister David Cameron announce his intended departure in the Autumn - he clearly misjudged the strength of feeling for Leave - and we will now be heading into unchartered waters as we negotiate our departure from the EU with a new PM (and probably chancellor) over the coming couple of years.

There will be lots of uncertainty and challenges over this period and beyond. Longer term, I am optimistic that the UK can do better for itself free from a failing EU. I suppose the question I ask is, if one member out of 28 choosing to leave the club is such a disaster, what does that say about the resilience of the club and the rules it follows?

I suspect the decision by the UK will accelerate the demise of the project and that other countries such as Sweden, Holland and France may well seek to offer a similar referendum to their people.

There is no doubt my portfolio has taken a hit this Friday morning - my shares in house builder Berkeley are down 20%!

If I needed my capital next week, I would be feeling a bit sick right now, but I do not so I am not overly concerned. These sort of events and the resulting volatility have to be accepted as part of the deal for every small investor.

For me its all about time frame for investing - hopefully another 20 years or so, and then selecting the most appropriate asset allocation to keep me in the game at times like this.

Over the past 18 months or so, I have been adjusting my strategy and taking on board the likes of Vanguard Lifestrategy 60 and this has helped to smooth out some of the volatility associated with my individual shares and other equities. I also have a significant weighting in fixed interest securities such as building society PIBS which provide a lot of stability (as well as income).

Hopefully, in the coming months, this episode will just be a blip on the landscape - the markets and the pound will bounce back as we all adjust to the new realities.

Be patient, stay in the game and keep it simple.

What did you make of the EU result? What about your portfolio? Feel free to share any thoughts in the comments below.
Posted by diy investor (UK) at 12:59