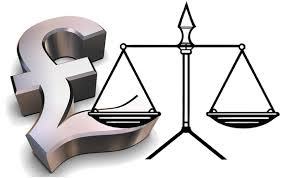 Since the momentous decision to leave the EU on 23rd June, the value of the UK pound has been under pressure. On the night it stood at $1.50 and has now fallen to $1.22 at the time of posting - a reduction of almost 20%.

On the plus side, the value of my largest holding, Vanguard Lifestrategy has seen a corresponding rise in price as the underlying holdings are priced in US dollars.

Over the past 25 years, the exchange rate has fluctuated between highs of ~$2.00 and troughs around $1.40. The long term average value of sterling is around $1.60, so at some point, I am expecting the pound to recover and move back towards this average level - according to the principle of reversion to mean. The pound may have further to fall, of course but sooner or later, it will bounce back, either as a result in the dollar becoming weaker or the pound regaining support as the Brexit story unfolds.

As I am more than happy with the 20% return from my VLS fund over recent months, I have decided to take profits from a part of my holding and have sold 25% of the fund which will now remain in cash awaiting developments.

I know this is trying to second guess the markets - equity, bonds and currencies - but it just feels like a prudent step to lock-in some of the unexpected gains and leave the remainder to run.

I hope it turns out OK.