House builder Berkeley Group have today issued results for the half year to end October 2016 (link via Investegate).

In 2011, Berkeley put in place a framework to deliver £13 per share to shareholders over a ten year period, as the market began to recover from the global financial crisis. Berkeley now have cash due of forward sales of £2.9bn, an estimated land bank gross margin of £5.9bn and net cash of £208m, which means the group is on target to deliver a new five-year target of £10 per share or at least £3bn pre-tax profit beginning 1 May 2016.

However, the Board is proposing to introduce flexibility such that the remaining £10 per share payments can be made through a combination of share buy-backs and dividends, as opposed to solely dividends. They confirm that the next £1 per share will be returned by 31 March 2017 with the amount of this to be paid as a dividend to be announced in February, taking account of the cost of any share buy-backs made in the intervening period.

Commenting on the interim results, CEO Rob Perrins said: "The prevailing environment is one of uncertainty and we expect this to continue with short-term fluctuations, both up and down, likely to be a reality. Our business is well set-up to perform strongly in these conditions and is centred around London and the South East.  Notwithstanding the UK's decision to leave the European Union, we believe that London will endure as a global financial centre and a place where people from all walks of life and corners of the world will continue to aspire to live and work.

We remain well positioned to deliver our existing earnings guidance for the three years ending 30 April 2018 of some £2.0bn of pre-tax profits".

There can be no doubt these are once again very good figures. The results were well received by the market and by lunch the share price was up over 5% £26.90.

In hindsight, it may have been better to dispose of my holding last year when the share price was ~£36 however, looking longer term, there is no reason to believe the price will not recover to these levels and beyond once the uncertainty surrounding Brexit is resolved and in the meantime I continue to receive a chunky dividend every 6 months.

I am happy to continue with this one for the foreseeable future. 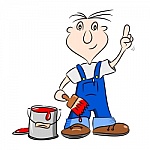 House move update - all went well on the day and new phone line and broadband connection was up and running after the first week. I am now busy with my long list of DIY jobs around the new house before my enthusiasm starts to wane - usually after the first couple of months!