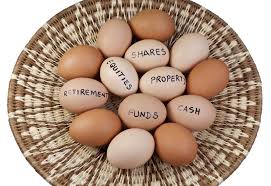 This is an update of an article first published in 2013 and forms part of my 'basics' investing series.

I guess most investors will have read somewhere that its generally good to hold a diversified portfolio. As with many aspects of life, it's not generally a good idea to put all your eggs in one basket.

Therefore, investing in a broad mix of assets such as equities, bonds, property etc. in many regions around the world will protect investors from a downturn in any single sector or region and also reduce the volatility associated with an over-reliance on for example equities or emerging markets. The aim will be to create a mix which can provide an acceptable level of return for the degree of associated risk undertaken.

Novel Investor (US-based) has created a nice asset quilt visual chart which clearly shows the returns for several types of asset over a 15 year period. I hope it will demonstrate how difficult it would be to select the best performing asset class year after year and why the better strategy is to hold a good mix of all assets.

Creating a simple yet diverse portfolio can be very straight forward. Pooled investment vehicles like investment trusts, exchange traded funds and OEICS are a good way for the small investor to build a diversified portfolio. Indeed with the broadly diversified Vanguard LifeStrategy fund you have the option of a one-stop investment vehicle providing all the diversity and balance that may be required.

Let's just take a look under the bonnet of the Lifestrategy 60 fund which represents my largest portfolio holding. It is a blend of several underlying Vanguard funds - some hold equities and some hold bonds
.
Equity Funds - 60%

So, in one single multi-asset fund there are 16 sub-funds which between them hold around 18,000 individual securities from all corners of the world. Vanguard frequently rebalance the funds to maintain the equity proportion at 60%. For running such a fund they charge the investor 0.22% which works out at £2.20 per year for every £1,000 invested. Investing does not come much more diversified.

Since its launch in June 2011, the fund has provided an average annualised return for investors of 9.0% per year which would certainly be 'good enough' for me.

Advantages of a Diversified Portfolio

It's all about the balance between risk and reward. Some assets such as equities will provide a better return than bonds over the long term. However, they are more volatile than bonds. For example, during the economic meldown of global markets in 2008, the FTSE lost over 30% in a matter of just two short months. The following year it was up 30%...this was a very testing time for anyone purely invested in equities and many investors were emotionally unprepared for the rollercoaster ride.

For those who held a more balanced mixed portfolio of say 50% eqities/bonds, the most they would be down in 2008 was nearer to 12% with a corresponding rise of 16% in 2009...still a little volatile compared to previous years but much less of a stomach-churning ride of the 100% equities and I believe most investors would be much less unnerved during a severe downturn.

Here's a link to Vanguard's asset mixer tool which provides a useful visual graph of the annual rise and fall of various allocations of equities/bonds/cash over any designated timeframe. It can be very useful for those wanting to explore asset allocation and their individual risk profile.

In addition to my Lifestrategy funds, I hold several investment trusts - some from the UK growth & income sector such as City of London and Finsbury Growth & Income, some for global growth such as Scottish Mortgage as well as others focussed on infrastructure and fixed income and for exposure to UK smaller companies I hold Aberforth.

Personally, I would never place all my investments with one fund or even several funds with just one provider. I like to spread the risk - some index funds, some professionally managed investment trusts. I like exposure to different sectors of the economy and prefer global rather than confining my investments to the UK-listed investments .

However, some would argue it is possible to be over-diversified. Legendary investor Warren Buffett suggests that if you diversify too much you might not lose much but equally, you won’t gain much either. His approach is to concentrate on companies he knows inside out and select a few well researched options out of which there is the expectation of some big ‘winners’. 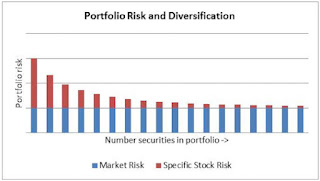 As can be seen in the chart, the benefits of diversifying a portfolio tail off as more investments are added to the mix.

Buffett is exceptionally experienced, skilled and disciplined in his approach to investing - many try to emulate his success but no one has come close. A return of just under 20% cagr over the past half century is a phenomenal achievement.

For the average small investor therefore, I would think the better strategy would be to focus on a good mix of assets which should closely match your temperament and appetite for risk. The diversified and balanced portfolio will always miss out on the very best possible returns but equally will avoid the terrible car crash whist delivering what should hopefully be acceptable and a 'good enough' return.

Feel free to comment below on how you go about maintaining a diverse portfolio.