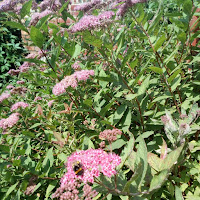 It's June, another 12 months have rolled by and time to review my SIPP drawdown portfolio at the end of its sixth anniversary. Here’s a link to the previous update of June 2017.


The original plan when I started drawdown in 2012 was to generate a rising natural income from which I would withdraw 4% income which I calculated should be sustainable over the longer term without depleting the capital. Three years later the plan was revised following the unexpected introduction of pension freedoms in April 2015.

I have also changed tack on how the income is generated. In the early years the plan was to focus on investment trusts and my Coventry BS PIBS which could generate a natural income of at least 4%. In the past couple of years my PIBS have been redeemed as expected and I have moved the portfolio to incorporate lower cost, globally diverse index funds and a focus more on total return. Therefore the Vanguard Lifestrategy funds have replaced some of my investment trusts.

Over the past 12 months I have used most of the surplus cash to make some additions to my portfolio. Last year I added TR Property which I also hold in my ISA. More recently I added HSBC Global Strategy Balanced which is very similar to my VLS funds and, looking towards capital preservation, I have added Capital Gearing.  Finally, I have topped up my Scottish Mortgage holding by taking advantage of a dip in the share price earlier this year. Although this global growth trust represents a modest percentage of my portfolio it has made quite a significant contribution to the value over the past 18 months with a share price rise of 60%.

I will be reviewing my strategy as the state pension has now kicked in but it is possible I will dispose of my Edinburgh IT in the coming year due to poor performance over the past couple of years. I may also dispose of the iShares Corporate Bond ETF as this area is adequately covered by my VLS & HSBC funds.

I will review also whether I still need to hold a cash buffer of around £4,000 or 10% of Lifestrategy value which could be drawn for 'income' during bear market periods. If I can get by on just the state pension if necessary then I am thinking the cash buffer is surplus to requirements. On the other hand, it is always useful to hold some cash in the mix to take advantage of opportunities which will arise during the next downturn and pick up a couple of bargains.


There has been a little more volatility in the markets over the past few months and I expect there will be more to come until the outcome of Brexit negotiations becomes clearer. We are currently looking at the imposition of tariffs by the US and a possible trade war involving China, Canada, Mexico and the EU. The whole of 2017 was fairly plain sailing but there are always events to spook the markets and volatility has to be accepted as a part of investing.

So far this year the markets appear to brush aside the political uncertainty <cue market correction>. There was a brief dip in the FTSE below 7,000 in March followed by a quick rebound. Over the 12 months, the FTSE 100 has seen a modest increase of 1.4% from 7,524 to currently 7,631...just over 5% including dividends. My SIPP portfolio is now more fully invested compared to June 2017 and whilst there has been some drag from holding cash, it is pleasing to see a modest gain of 5.3% over the year. Over the longer period, the starting value in June 2012 was £62,000 and taking account of monies withdrawn, the portfolio has risen above £100,000.

Returns have been mixed over the past year. Edinburgh -6% and HICL -10% have been the main underperformers. On the positive side are Scottish Mortgage +33% and Aberforth +13% and new addition TR Property +17%. My core holdings of Lifestrategy 60 & 40 have provided stability and an increase of £1,125 or 3.9% compared to 2017.


Here is the portfolio 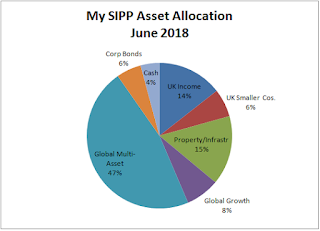 Taking account of the income withdrawn over the past 6 years of £19,400, the total return including income is 77% which is very satisfactory and works out at an average annualised return of 10.0% p.a.

The original aim of the sipp drawdown was to generate and withdraw a steadily rising natural income from my investments trusts to keep pace with inflation.

Under the pension freedom changes which took effect from April 2015, I am now able to drawdown as much or as little as required. As my pension was my main source of taxable income, it made sense to reduce the pot by transferring the capital tax free to my ISA on the basis that it would be taxed when my state pension started. Over the past three years I have taken out £32,000 tax free. Some of this has been needed for income (£10,350) and the rest has been invested in my ISA to generate more tax-free returns.

I realise I have not recorded drawdown income taken from the portfolio so will factor this into future reports. The first full year was a modest £2,800 after year 1 and this has gradually risen to £3,600 which is a 28% uplift over the 6 years.

Many of the income trusts have been sold and my PIBS redeemed so there is now less natural income. Over the past year this income reduced from £2,075 to just £1,395. This has been withdrawn plus a further £2,205 from the cash surplus making a total of £3,600 for this past year - a small increase on the previous year.

I have relied upon income from my SIPP to supplement my ISA income and bridge the 10 year gap between early retirement at age 55 yrs and state pension. This part of the journey is now 'mission accomplished' whoo hoo!

My state pension has just  commenced and I will therefore be less reliant on the income from my SIPP for essential living costs and it will become more for discretionary spending or more likely remain invested. Unlike an annuity which, once purchased means the capital lump sum is lost forever, any residue in my SIPP will pass on to my children and grandkids..tax free if I go before 75 yrs and thereafter possibly 20% or tax free depending on circumstances. For those interested here's a link on the AJ Bell site.

I will receive a state pension of £8,450 over the coming year and as this is taxable, it will limit the tax free sums I can take from my SIPP to around £3,400. Any pension money withdrawn above this amount will be taxed at 20%. I have now plugged the additional income including cost of living increases into my s/sheet for the next 10 years...a total of around £100,000 which will be very welcome indeed. 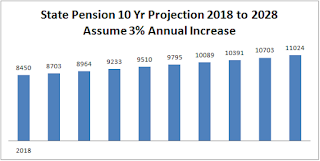 I retired from paid employment at the age of 55 yrs and obviously at the start of the process there is some uncertainty on the big question of what is a sustainable level of income to draw down. My starting point was ~4.0% and since commencing drawdown this has been well within the average level of growth of 9% or so generated by the portfolio over the past decade which gives me more confidence that this level of drawdown could continue longer term if needed. Which leads to the next point....


Having been a saver all of my adult life and living well within my means, I find it quite a challenge to become a 'spender' now the extra funds are available! I possibly no longer need the 4% income from my pension as living expenses are covered by the state pension. Frugal Freddie is unlikely to morph overnight into Lavish Larry...I have not so far been looking online for deals on a Caribbean Cruise or along to the showrooms looking at a new Lamborghini so I now need to review my investment plans and decide how to proceed from here on. I will probably post a little more on this when I get used to the new situation.

Obviously I am reasonably happy with my first few years of self-managing a flexi-drawdown sipp portfolio. For the first 3 years, the dividend income predictably rolled in much as planned and importantly, increased each year a little ahead of inflation. For the past three years I have withdrawn significant lump sums tax free and placed the excess which I did not require for income in my ISA. Of course, there are no tax liabilities for all monies subsequently withdrawn from my ISA. I will have less need for income from my SIPP in the future and will therefore slim down some of the income-focussed investments and look at some global growth and possibly one or two 'themed' investments.

So, all in all, happy days!

If you are managing your SIPP drawdown or you are planning to do this, feel free to share your experience in the comments below.