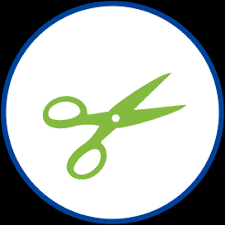 I have been on the look out for a more globally diverse, ethically orientated fund for a little while and recently found this new ETF from iShares launched in April (ticker EDMW).

It is basically a developed world index fund however the fund rules out companies involved in unethical businesses such as weapons, landmines and tobacco for example. It also excludes companies involved in coal production and oil sands. It also scores the remaining constituents according to environmental, social and governance criteria - ESG - and therefore companies which may be smaller but come out with a higher score will get a larger weighting in the overall portfolio.

For example, one of my individual shareholdings Orsted, a global leader in offshore wind gets a higher percentage weighting 0.14%, than much larger companies such as Mondalez or Kellogg for example. By comparison the weighting for this company with my Vanguard SRI is just 0.03%.

"In recent years ESG investing trends have been driven by more investors seeking not only social benefits but also managing financial risks and opportunities. In fact, a recent survey indicated that most asset owners surveyed see the management of financial risks as the key benefit of ESG. In addition, after the COP 21 conference in 2015, many investors came to realize that climate change is not only an environmental topic but also a financial risk that will very likely have a material impact on many companies’ profitability during the global transition toward a low carbon economy. An estimated $25 trillion invested in carbon-related infrastructure is thought to be at risk from this transition".

Here is a comparison of weighting of the large oil companies with my Vanguard SRI Global which I covered back in February. I am not sure why some companies such as Shell are held in the Vanguard fund and not the other whilst BP is in the iShares fund but not Vanguard. 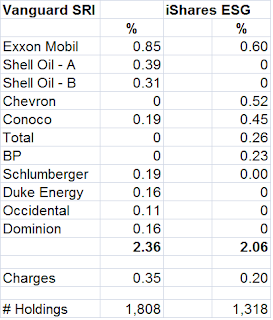 Ideally I am looking for a global index fund that excludes these big oil company shares as well as some of the other high carbon polluting industries such as airlines and meat production - a truely climate-friendly alternative. It would be even better if it was multi-asset fund including government and green bonds! But for now this may be as close as I am going to get other than the managed options.

I have been asking my broker AJ Bell to list this ETF for a while. They initially told me they could set something up if I had £85,000 to invest however, after getting iShares involved, I have now had confirmation that they will now agree to do this for ordinary investors to purchase...thanks but it really should not be so difficult for investors to hold ESG funds!

I now need to do a little more research and also assess whether right now is the best time to invest in more equities given the rise of the markets and the fall in sterling compared to the US dollar.