This energy company based in Denmark is a global leader in offshore wind with around 30% of global capacity and operations in Denmark, UK, Germany and Holland. It also operates several wind farms outside of Europe in the US and also Taiwan. The company's vision is to see a world run entirely on renewable energy.

The shares were added to my portfolio in April at 495 DKK and have advanced nicely over the past few months to 630 DKK. They also now feature in some of my other holdings - Mid Wynd Trust and Baillie Gifford Positive Change.

The company has today announced half year results to June 2019. Operating profits increased to DKK 8.8bn (2018 8.5bn) and expectations for the full year are well on track.

CEO and President Henrik Poulsen says: "2019 has been a very good year for Ørsted so far. Operating profit for the first half of the year amounted to DKK 8.8 billion, which was in line with our expectations and keeps us well on track to deliver on our full-year guidance of DKK 15.5-16.5 billion.
We were selected as preferred bidder in the auctions in both New Jersey with our Ocean Wind project (1.1GW) and New York with the Sunrise Wind project (880MW) which we own in a JV with Eversource. Subject to final investment decisions, the wind farms are expected to be completed by 2024. We are very pleased with these awards and are well on track to reach our ambition of 15GW offshore wind capacity by 2025 as we continue to pioneer the global offshore wind industry.
In June, we officially inaugurated the Borkum Riffgrund 2 offshore wind farm in Germany and in July, we commissioned the Lockett onshore wind farm in the US well ahead of schedule.
In June, we acquired the 103MW construction-ready onshore wind project Willow Creek in South Dakota in the US. The project is expected to be commissioned by Q4 2020 and will expand our operations in the Southwest Power Pool market, covering the central US".

The share price has increased by 27% since purchase to DKK 630 and this is the second largest holding in my 'green' portfolio.

The shares yield around 1.7% based on the current price.

In the North Sea, 131 turbines have been installed and Hornsea 1 is due to be completed later this year and will become the world's largest offshore wind farm with a capacity of 1,218MW. Work has started on Hornsea 2 which is due for completion in 2022.

The company is on track to be carbon-free by 2025 and have plans for the sale of the remaining gas and fossil-based power operations which make up around 18% of the business. They have announced plans to phase out their company fleet of petrol/diesel cars and replace them will fully electric by 2025. The company has a strong commitment to the Paris Agreement and the UN Sustainable Development Goals.

The company has set ambitious targets to reduce greenhouse gas emissions in their supply chain by 50% by 2032. 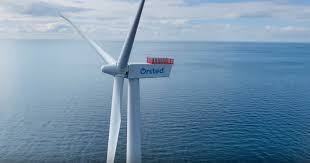 So, although there are the inevitable currency considerations and the higher risks associated with single share ownership, I am happy with progress so far but it's early days.

The company is awaiting the outcome of various tenders on new projects in the US, Taiwan and Europe and news should unfold later this year. So, fingers crossed.