As so often is the case, whilst researching energy from hydrogen in connection with my recent purchase of ITM Power, I was sidetracked by another player in the same sector.

AFC Energy (AFC.L) is a small company listed on the AIM market. However it is one of the market leaders in the hydrogen revolution as we transition from fossil fuels to clean energy. Hydrogen is regarded as a key element in the governments announcement to reach net zero carbon emissions by 2050. The UK will host the COP 26 UN climate conference in 2020. This will focus the governments attention on climate issues and push forward policies to bring about its objective of net zero emissions.

They are a next generation energy company offering to deliver zero-emissions electricity wherever and whenever it is needed.

The company provides large scale off-grid fuel cell systems from a basic 10 kW up to a 1.2 MW based on a modular system developed in 2018. Fuel cell technology has been around for many years but the high costs of production has held back the wider commercial uptake.

The company has also developed the world's first electric vehicle charger - CH2ARGE and is now looking to enter the EV charging market. They have signed a collaborative agreement with Europe's largest EV charging point manufacturer.

Hydrogen is the most abundant element in the universe. The AFC system is fairly simple - the input is a mix of hydrogen and oxygen (from the air) which is converted in the cell to provide electricity, water and heat. The electricity produced will be continuous so long as there is input of hydrogen and air. 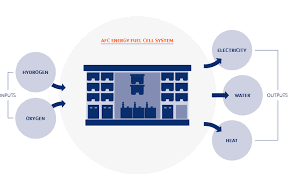 Their fuel cell can be deployed as part of a "hydrogen battery" scheme. When grid demand is low, the excess power generated from renewables such as wind and solar, can be diverted to a water electrolyser for clean hydrogen generation. This can then be stored and optimally released to the company's fuel cells at periods of peak demand (higher tariffs) to support a more flexible grid.

In the most recent half-year report (pdf via company website), Adam Bond, CEO since 2014, said: "The productisation of AFC Energy’s fuel cell system is now well underway. Delivery of the first hydrogen fueled EV charger for deployment across the UK later this year, to be followed by modular stationary off grid power systems, highlights the corner AFC Energy has now turned in taking its hydrogen power units to market. This in no small way has been driven by the acceleration of Government policy towards decarbonization of the transportation sector in parallel with the push for reduced air pollution from the off-grid power market.

The last six months has seen several important landmarks in our history, including the achievement of record electrode lives in collaboration with De Nora, further progression on the cost reduction of electrode manufacture, the bringing together of the supply chain for our systems’ mass production and the introduction of AFC Energy’s new high power density alkaline fuel cell system. I am particularly excited about the growing success in system integration we are seeing, including the potential for the steps forward in the use of ammonia as a lower cost fuel for point of use hydrogen generation, which will allow us to target new growth markets for the fuel cell, seeing AFC Energy as a leading exponent of the rapidly emerging hydrogen economy, both in the UK and internationally."

Obviously there is huge potential in the hydrogen sector as we transition towards low carbon energy solution. The likes of AFC Energy could expand rapidly if their solutions prove to be popular but other players will enter the market as it grows so there are risks for investors.

I am encouraged by the 33% uplift in ITM Power over the past two weeks so I am prepared to modestly speculate with AFC and have added this share to my green portfolio at the price of 4.8p - as can be seen from the above chart, the share price can be very volatile...but you get an awful lot of shares for your money!