The Carbon Budget - An Introduction

[N.B. This article is mainly about climate change. If this subject is of no interest to you please feel free to skip] 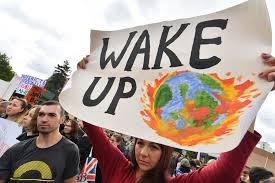 A basic understanding of our global carbon budget is essential for anyone who wants to get to grips with climate change. It was one of the stand-out elements of learning for me when researching material for my latest book "Climate Emergency!".

Just like good housekeeping where we adjust spending according to income, a carbon budget will tell us how much carbon dioxide we can put into the atmosphere over a given period of time to keep within a certain temperature range.

The Intergovernmental Panel on Climate Change (IPCC) have determined that global temperatures should be kept well below 2.0C by the end of this century and the aim is for a limit of 1.5C.

Global average warming has risen by 1.1C above pre-industrial baseline so far. Warming in the polar regions is twice the average and temperatures in Siberia this summer reached an all-time high of 30C causing extensive wildfires and smoke visible from Alaska.

In the past week we hear that the iconic polar bears will become extinct by the end of this century as the Arctic sea ice disappears.

We are currently on track for 3.2C by 2100 so clearly some big changes are needed if the targets are to be met. Fortunately our global response to Covid-19 has demonstrated that we are capable of implementing big changes to the way we live when the threat is apparent. 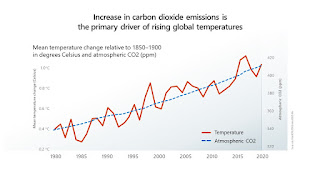 What Are the Main Causes?

Global warming is mainly caused by the release of greenhouse gases (GHG) such as carbon dioxide, methane and nitrous oxide. The main source of these GHGs is from our use of fossil fuels such as oil, gas and coal which are all widely used all around the world...for transport - cars, lorries, airplanes, industrial processes such as steel and cement production, energy production and heating our homes and places of work.

These gases hang around in the upper atmosphere for many years. In the case of carbon dioxide, over 100 years. Each year we accumulate more and more GHGs and as a result the planet gets warmer and warmer.

How Long Do We Have?

Globally, the climate science indicates that we can be fairly sure that adding another 380 gigatons of carbon will take us to 1.5C. We have been adding around 40 gigatons each year so if we carry on at the same rate, we will reach 1.5C by 2030...less than 10 years. It does not seem that long ago since we were enjoying the London Olympics - Mo Farah & Jess Ennis winning gold medals on super Saturday was just 8 years ago in July 2012.

These annual accumulations can be thought of in terms of filling a bucket. When the bucket is full, it's 'game over'. Greta Thunberg shared a graphic from climate scientist Glen Peters which describes this concept.

So, at the current rate of emissions we seem to have maybe 8, 9 or 10 years left before the bucket is full.

With a target of 2.0C, the limit for carbon emissions rises to 1,630 gigatons which would be reached by the year 2060 at current levels of emissions output. Needless to say the impact of climate change would be far worse at this higher temperature with the risks of runaway warming increasing exponentially.

Most people will be aware of the impact of rising global temperatures - increased wildfires, rising sea levels, more intense storms, droughts etc. However, what the scientists are very concerned about is the catastrophic effects of triggering an irreversible tipping point - a point of no return.

When we reach and exceed 1.5C, the climate scientists are warning of runaway warming where whatever steps we take after that point would not reverse the process. We could trigger one or more tipping points which create a feedback loop which trigger more tipping points leading to exponential warming. Like a runaway train. 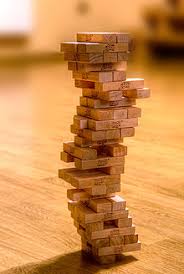 These tipping points could be large scale melting of the Greenland or Antarctic ice sheets leading to accelerated sea level rise, continued destruction of rainforests in Brazil and West Africa, the melting of frozen tundra releasing huge amounts of methane which is 20x more potent than CO2.

Prof. Tim Lenton in this article by Carbon Brief suggest these tipping points are like a game of Jenga. With each annual increase in temperature, a brick is removed and the tower becomes increasingly unstable...but we don't quite know when it will collapse.

Of course, this begs the question - why do we continue with the game year after year? Do we have a collective death wish?

This year we have all been preoccupied with Covid, naturally. But although the lockdown has led to a fall in global GHG emissions, it will be no more than a temporary blip if we carry on as before when we eventually unlock.

Personally, I think we all need to start treating the climate situation as a crisis or emergency and make some changes. Clearly the biggest part of this problem is the continued use of oil, gas and coal. This needs to stop. Obviously, as investors, the first and most practical step would be to divest (remove) our portfolios of fossil fuel companies.

It should be a fairly simple process with individual share holdings like Shell and BP. Sometimes it is less obvious with managed funds so make a point of finding out whether the funds in your portfolio hold fossil fuels.

Many investors will probably have a significant proportion of their portfolio in the low cost index funds and inevitably these will all hold quite a significant element of the big oil & gas companies such as Exxon, Chevron and also coal producers such as BHP, Glencore, Adani, Peabody etc.

There are now an increasing range of alternative low cost index funds which exclude these carbon-intensive companies such as the iShares ETF I featured in this recent article.

Many will have a pension and a target retirement date many years ahead. If it's a SIPP then we can make any necessary changes to our portfolio. If it's a works pension then make a point of finding out where the managers of the fund invest the money and make sure yours is invested in a climate-friendly option.

Of course, investments are just one small part of the equation and we really need to look at all aspects of our lifestyle. Here are a few suggestions from an article in 2018:

Feel free to add your own lifestyle suggestions in the comments below.

The urgent response to the coronavirus pandemic suggests the global community can move very quickly when faced with a huge and immediate threat to life. This gives me optimism that we can respond to the impending climate crisis...it just means our leaders need to listen to the climate science and respond with a "whatever it takes" attitude they adopted for Covid...and quickly...before that bucket fills to the brim.

The bottom line is that all of this is man-made warming so if we are responsible for causing the problem, we must be capable of solving it.

Over to you...share your own thoughts; are you concerned about these issues or fairly relaxed; what more should our government be doing; would changing our lifestyles make any difference if other countries carry on with business as usual?
Posted by diy investor (UK) at 10:06