ChargePoint is the leading electric vehicle (EV) charging network in N America and Europe. Founded in 2011, it recently started trading on the New York stock exchange to become the world's first publicly traded charging network - ticker CHPT. EVs are clearly the future as governments legislate to phase out the internal combustion engine to address climate change...this will be 2030 in the UK. The EU have pledged to reduce carbon emissions by 55% by 2030 and are expected to ban the sale of new petrol/diesel by 2035 (at the latest). In the US, the new Biden administration plans to spend $2 trillion to 'green' the economy and roll out a raft of climate-friendly measures to address the climate concerns. The new administration has plans to install 500,000 public charging stations in the US by 2030.

Top EV maker Tesla is leading the charge to bring about the revolution in the way we drive but the likes of Ford, GM, BMW and VW are raising their game. It is estimated that around 30% of all cars on the road will be EV by 2030. That's an increase from 10 million to 145 million in the coming decade according to the latest forecasts from the IEA and possibly as high as 230 million if global governments get their act together on net zero policies.

Most of the current EV stations provide level 2 charging which is 240 volt AC power. This will give around 25 to 30 miles of range for the average car in one hour which is fine for overnight charging or when parked up at the office all day. CHPT is the market leader in level 2 charge points but is now looking to expand a range of superchargers which operate on DC supply and can offer a range of 200 miles in less than 15 minutes. They currently have around 2,000 of these more powerful charging stations in N America and Europe which represents around 2% of the total. 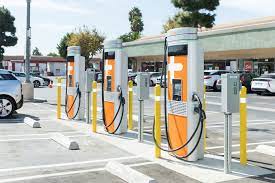 To date more than 92 million charging sessions have been delivered with a customer linking up to the network every 2 seconds.

In addition to the physical charging infrastructure, they are connected via industry-leading cloud software making the transition to EV as easy as possible for drivers. The app offers a range of features which includes a map of nearby charging points, remotely start a charge session from a smartphone, check charging status and get notified when charging is complete. In addition the app can link up with a home supply network to take advantage of cheapest charging rates.

They operate an open network which means its easy for any charging station to be used by any EV driver. Chargepoint is making efforts to sign up roaming partnerships with other networks so drivers can access a wide range of charging points throughout the country with just one account and mobile app.

According to the latest Q1 results, revenues increased by 24% to $40.5m and forecast for the coming full year is $200m which would represent a 37% increase on the $146m revenues recorded in the last full year. The company is still to make a profit due to ongoing investment in R&D and expanding network however the company expects significant growth over the coming years after stalling with the Covid pandemic last year and is targeting profitability by 2024

In 2019, sales of EVs in the US and Europe accounted for less than 3% of all sales. By 2030 this is forecast to be 30% according to research from Bloomberg NEF.

The driver of this business is obviously the transition from petrol/diesel to electric. The company forecasts the sale of 2.3 million EVs  across N America and Europe this year which would represent an increase of 40% on 2020. This is likely to be repeated each year for the coming decade which should be good for the likes of Chargepoint and hopefully they can move to profitability as the business scales up.

Of course there will be more competition for this business, the car manufacturers are increasingly moving to EVs and will want a slice of the action. Ionity is a joint venture between Ford, VW, BMW and Daimler and aiming to expand fast charging infrastructure throughout the UK and the rest of Europe and of course Tesla have their own network of supercharging points.

Here in the UK, transport accounts for 27% of our greenhouse gas emissions and over half of this is from cars so it will be an important sector for the government to target over the coming decade with our pledge to reduce our carbon emissions by 78% by 2035. This will inevitable mean a massive increase in charging infrastructure in our homes, motorways, roads, towns and cities. Last November the PM announced £1.3bn to accelerate the roll out of charging infrastructure in his 10 point green plan. More details should be included in government's Transport Decarbonisation Plan due in the near future.

The stats page from Zap-Map provides a good reference point to the current state of play here in the UK.


Like most of the new players in the new emerging economies, there are risks but also big rewards if these companies can make the transition work out with their business model. The shares reached a high point of $49 earlier this year but have recently fallen back. The shares were purchased at the price of $32.50 last week and funded from taking profits on a partial sale of my holding in Enphase which has done well, up 60% since purchase last November.
The new addition accounts for just 2% of my green portfolio and makes a total of 20 individual holdings which account for 75% of the portfolio with the remaining 25% accounted for by 3 collective ETFs.

As ever, this article is merely a record of my personal investment decisions and should not be regarded as an endorsement or recommendation... investing in individual companies listed on a foreign exchange can be rewarding but is higher risk compared to collective investments - always DYOR!