Bluefield Solar (BSIF) was added to my SIPP portfolio in March 2019. Its initial focus was purely on solar power in the UK but in 2020 the Company resolved to broaden its focus to include up to 25% in other forms of renewables such as wind and also energy storage and also expand overseas. They have recognised that storage of renewable energy will become a vital part of the transformation towards net zero emissions over the coming years and I certainly think this is a smart move.

In June, the company announced a deal to acquire 109 small-scale onshore wind turbines for £63 million located throughout the UK. 90% have government subsidies and the remainder will be exposed to fluctuating power prices.

Approximately 60% of solar assets are covered by the old subsidy scheme which provides a guaranteed return for 20 years from the date of connection to the grid. The other 40% have rolling power purchase agreements which generally last for 2 or 3 years and are then renewed.

The company has today issued full year results to end June 2022 (link via Investegate). Underlying earnings per share increased by 4.1% to 9.54p and the share price total return including dividends rose by 14.5% due to a boost in the share price from 121p at the start of the period. Total returns over the past decade since launch have been 92%.

The company pays quarterly dividends and will pay out a total of 8.2p for the year which gives a yield of 6.1% based on the current share price of 133p. They have a target of 8.4p for the coming year however, it is worth noting that the board have now de-linked dividend increases from RPI.

"It is highly pleasing to report another set of excellent results for Bluefield Solar. With maiden investments into onshore wind and storage, as well as further acquisitions of solar, supported by two successful capital raises, the financial standing of the Company has never been stronger as it enters the FTSE 250. Furthermore, the growth of the Company's development pipeline to over 1.1GW, provides Bluefield Solar with a wonderful opportunity to play an increasing role in the transformation of the UK's energy map.

Over the past year inflation has surged, reflecting higher commodity and energy prices following a recovery in demand from pandemic lows. Since March 2022, Russia's invasion of Ukraine and the continuing conflict there have helped push inflation to levels not seen since the 1980s. The result is current UK inflation, on an RPI basis, close to 12% (CPI 9.4%).

Prevailing opinion among economic forecasters remains that inflation will abate during 2023, but it is possible that price pressures will endure. Since our income grows with inflation, resulting from the indexation provisions in our regulated revenues, increases in RPI boost both our earnings and the valuation of our assets.'' 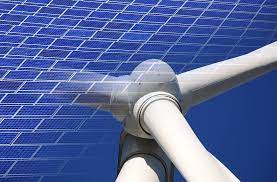 The ability to store excess renewable energy will be the key to a full transition on the UKs path towards net zero by 2050. The government have recently relaxed the rules to encourage far more storage capacity which should be good for the likes of Bluefield. They have excess capacity and spare land which could lead to productive partnerships with storage providers subject to planning considerations.

Over the past year, good progress has been made on the Company's strategy of investing in the future build out of the UK's renewable mix through receipt of planning consent on two ready to build PV plants totalling 80MW and investments into ready to build co-located solar and storage (45MW and 25MW, respectively), as well as standalone battery storage of over 100MW.

Increasing electricity demand, as the world emerged from the Covid 19 pandemic, had seen power prices rising steadily but Russia's invasion of Ukraine sent shockwaves through European energy markets, with concerns around the supply of Russian gas to Europe driving a 45.5% increase in gas prices and sending UK day-ahead power prices surging from c.£78/MWh to highs of c.£593/MWh in August 2022.

Navigating such turbulent times requires care, and the Company's PPA strategy of fixing power for between one and three years has allowed it to fix power contracts throughout the period of rising prices. This not only insulates the portfolio from market volatility, as successfully demonstrated during the Covid pandemic, but also enables it to create pricing certainty at increasing levels for up to three years ahead. Evidence of this is seen in the average fixed price achieved for fixed contracts from January 2022 onwards. As at June 2022 the average weighted price for these contracts were £190.1/MWh, £303/MWh for January 2023 and £230/MWh for June 2023. This provides the expectation of over 2 x dividend cover (post and ex-carried forward earnings) in the financial years ending June 2023 and June 2024.

The energy crisis has resulted in power prices reaching unsustainably high levels, putting pressure on every section of the economy. The government is engaging with renewable energy generators to see how the industry can be part of the solution, recognising that the renewable energy sector is well placed to play a major role in creating a long term solution to this crisis. Solar and wind are today the lowest cost generators in the market, their technologies are relatively quick to deploy and they provide indigenous, clean and secure supplies of energy.

In contrast to many of my other holdings... including government bonds, it's been a good year for this fund and the renewables sector generally due to rising energy prices and the knock-on effect of increased inflation. The share price has increased by 10% over the past year from 121p to currently 133p which reflects a discount to the net asset value of 140p. Hopefully it can move to a premium again when the current market volatility settles.

Earlier in the year I added this fund to my ISA and the combined holdings now account for around 6% of my green portfolio.

I believe the longer term prospects remain bright however we have to contend with the uncertainties around new Truss government over the short term. The markets have been in turmoil since the hapless mini-budget last week and I suspect this new regime will not be around for much longer. After 12 years of an increasingly dysfunctional Tory government, the country is ready for a change. Longer term, the renewable energy sector would benefit from a Labour government which has recently pledged to decarbonise our electricity grid by 2030...very ambitious.