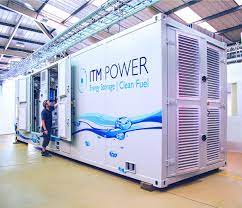 ITM Power (ITM.L) designs and manufactures electrolysers which split water to generate clean hydrogen based on Proton Exchange Membrane technology. Last year it opened its new Gigafactory in Sheffield with the prospect of producing 1GW of clean hydrogen each year. It is estimated that the new factory will cut the costs of electrolysers by 40% due to increased automation and economies of scale.

It has this week announced results for the year to end April 2022 (link via Investegate).

The share price tumbled by 20% on the unexpected announcement that long-standing CEO Graham Cooley was to step down as soon as a replacement could be found. It looks like the rapid growth over the past couple of years has brought a number of challenges that the CEO feels is now beyond his abilities.

Pre tax losses almost doubled to £46.7m (£27.6m 2021) with revenues of just £5.6m following delays to delivery of its new technology to the Linde Leuna factory. Revenues from this project could not be included for the current year and will therefore roll forward to 2023.

Last October the company raised £250m to build two further factories - one in the UK with a capacity of 1.5GW and the other in Germany with a larger capacity of 2.5GW. However, these plans are currently under review and the likely course will be scrap the 2nd UK factory and to expand the exisiting factory from 1GW to 1.5GW.

The company had net cash of £365m at the end of April and is pushing ahead with expansion plans with an anticipated cash-burn of around £120m over the coming year.

Graham Cooley, outgoing CEO, commented :  "There is only one net zero energy gas that can replace methane to help the world address climate change. Green hydrogen can also help to deliver energy security and contribute to food security through the production of green ammonia for fertilisers.

These abilities have become very powerful drivers for our business as governments seek to accelerate the share of intermittent renewables in their countries' energy mix to address dependence on weaponised gas supply from Russia. Over the last nine months, as the prices of methane and fertiliser have increased, green hydrogen has achieved first parity and then become cheaper in many cases than producing these commodities from gas feedstocks".

"In and since our last financial year, ITM Power has completed a transformational fund raise, won our first project for green ammonia, further developed our technology and production systems and set out a path that will enable us to remain a world leader in electrolyser manufacture. I believe the next twelve months will see the benefits of our position becoming even clearer as governments urgently address their dependence on methane."

“We are on the verge of a major energy and industrial step-change. I describe it as the fourth industrial revolution, one of interconnectivity and automation, powered by Net Zero, and ITM Power is playing a key role in supporting this revolution.

It has been a privilege to lead ITM Power through its transition from an R&D business to a world leading electrolyser manufacturing company. No CEO can remain in place indefinitely and now, as we seek to become a global manufacturing powerhouse, is a good time for me to step aside and hand over to someone with more experience in this area”.

Following the invasion of Ukraine and the reduction in the supply of gas which is being used as a weapon by Putin, the European Commission announced its EU Hydrogen Strategy and its Energy Systems Integration Strategy. The announcement prioritised the development of renewable hydrogen, produced using mainly wind and solar energy. From 2020 to 2024, they will support the installation of at least 6GW of renewable hydrogen electrolysers in the EU, and they have now doubled earlier longer term plans and aim for 160GW of green hydrogen capacity by 2030. ITM with its partners Linde and Snam should be well positioned to benefit from these opportunities.

The potential for green hydrogen worldwide is huge but for investors in the individual companies, it remains risky as nobody really knows who will come out on top. The company still has plenty of cash to maintain operations for the next couple of years but needs to find a new CEO to steady the ship and get plans back on track. The share price reached a high point of over £7 in January 2021 but since then has been in steady decline to currently 117p.


If the new management can get to grips with the underlying issues of contract delays and strategy planning then we could see a turn around but for now the shares are no more than a weak hold...fingers crossed for a recovery.

In the past few months I have started to take some of the profits from my green equity investments as I move to a more defensive position.