In 2018 I started to transition to a more climate-friendly portfolio to bring my investments more closely into line with my values and lifestyle. I was becoming increasingly uncomfortable making profits from companies which continue to make the climate crisis worse. I decided I needed to avoid the fossil fuel companies such as Shell, BP and Exxon and also the big banks which fund their activities.

So, for the past few years I have dropped the global index funds such as Vanguard Lifestrategy and have moved my portfolio over to greener investments such as iShares Global Clean Energy, a range of renewable infrastructure trusts and various smaller companies with a focus on green hydrogen such as Ceres Power.

In addition to these listed investments, I have taken a stake in a new co-operatively owned wind farm via Ripple Energy which is due to be completed later next year and will then provide a significant reduction in my bills from Octopus. Given the developments in Ukraine over recent months with Putin using the withdrawal of gas supplies as a weapon and the crazy increase in our energy bills I think this will turn out to be a very good investment!

So, staying with the ‘alternative’ green energy investment theme, I have recently taken up a small stake in a new share offer from Thrive Renewables (previously Triodos Renewables).

Thrive has been going since 1994 and is all about connecting ordinary people with sustainable renewable energy opportunities. They now have around 6,000 investors - individuals, businesses and organisations - and have established 31 projects throughout the UK including solar PV, battery storage, geothermal, hydro and wind. The combined capacity has generated over 2 million MWh of clean electricity over the past 25 years.

Thrive is cerified B Corporation from 2020 with a score of 110.8 - the highest scoring renewable energy company in the UK. They currently rank in the top 5% of all global B Corps.(link) 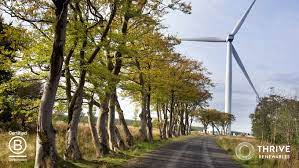 The company are now raising £5m to fund the next new phase of renewable energy projects via the Triodos Bank crowdfunding platform. The shares are offered at £2.35 - min. 40 shares for £94 and offer a target return of 5-8% p.a. via dividends and share price appreciation. This an unlisted company so the shares in Thrive are not as easily traded as shares listed on the stock exchange with a low cost broker such as AJ Bell Youinvest for example. Instead, once purchased, any subsequent share sales are facilitated via a monthly share auction.

Here’s a link to the Triodos Crowdfunding site for those who are interested in further info about this share offer. It looks like the initial target of £5m is very close and they are now extending this to £7m with a further month to apply.

Each year we see more and more evidence of the devastating impacts from the climate crisis all around the world. This year we witnessed flooding in Pakistan covering a third of the country and affecting 30 million people. Closer to home we have seen the heatwaves affecting large parts of Europe resulting in wildfires and droughts. Climate scientists have revealed that the Arctic is warming at 4x faster than the global average.

As we move towards the end of 2022, many millions of people will be affected by the energy crisis - we may well see the lights go off here in the UK this winter. Average bills were due to rise to £3,549 from October and maybe as high as £5,000 in the new year but in the past week the government have confirmed that the increase will be capped level of £2,500 from October for a period of two years. Even this will be more than double the average of just a year ago...the energy market is clearly no longer fit for purpose and in urgent need of reform.


The climate scientists have been warning of the consequences if we fail to reduce carbon emissions and now we are seeing the effects of this failure to take decisive action. We need to start to treat this like the emergency it has become and commit to end our reliance on fossil fuels and transition quickly to a more sustainable system based on a range of renewable energy solutions combined with measures to insulate our homes and factories to conserve energy.

Obviously an investment in Thrive Renewables will only have a small impact on the climate crisis. However, the more people that invest in these sustainable solutions, the quicker we can transition to a less threatening world. Business as usual and continuing to rely on fossil fuels is no longer an option. Never before has it been so important to accelerate home-grown renewables and reduce our dependence on expensive, climate destroying fossil fuels.